Taking advantage of the lulls between the depressions sweeping in from the Atlantic and deluging West Yorkshire, my son and I headed out of Wharfedale to two of Yorkshire Wildlife Trust’s reserves, both wetlands but mercifully unflooded.

Staveley, northeast of Knaresborough, is a beautiful small reserve set around lagoons edged with reedbeds and marshland. It is worth visiting just to enjoy the biggest of its three hides, a magnificent, environmentally-friendly construction built around a hexagonal frame into which straw bales have been fixed on hazel stakes. Picture windows built into five sides give views over the West Lagoon.

On our visit the ever secretive otters and bitterns eluded us but it was alive with lapwings, ducks and geese. Among the big numbers of teal, wigeon and mallard were a few gadwall and just six goldeneye, all females. With the climate warming, fewer goldeneye are migrating southwest from their breeding grounds and many of the males now winter around the Baltic and see no reason to move further. The females, moving later after rearing young, perhaps find the competition for food too fierce so keep going across the North Sea. 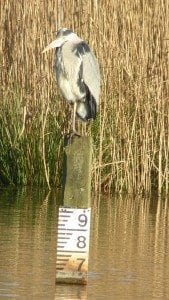 A week later, having watched in disbelief as Otley bridge and Farnley Lane were flooded for the second time in six weeks, we headed south to Potteric Carr, on the edge of Doncaster. It had been spared the rain and, as if to stress the point, a heron perched on a post showing a water level three feet below maximum (pictured). Potteric Carr is much bigger than Staveley with thirteen hides overlooking multiple lagoons and reedbeds. Here again there were hundreds of ducks but no goldeneye at all.

The mildness of our winter was again emphasised but by a different duck, for big flocks of shoveler were present. These use their long spatulate bills to sieve the surface of shallow water so are particularly susceptible to freezing conditions. Most winters, the majority move south with many migrating to southern Europe where they can be seen feeding alongside flamingoes.

At the edge of one of the lagoons was a little egret. I travelled to the Camargue in southern France to see my first 45 years ago but they are now fairly common across the north of England having gradually expanded their range northwards as global temperatures have risen.

Climate change is here to stay and maybe our waterbirds are adapting better to warmer winters than we are.