Butterflies come and go throughout the year and it is sad to see the Northern Brown Argus nearing the end of it’s season. I’ve been visiting two fantastic sites in Upper Wharfedale since the end of May and although butterfly numbers may not have been as impressive as previous years, there are still plenty of different species to see. I only spotted a handful of Northern Browns yesterday and those that I did see looked a little worse for wear (see the featured image above). I didn’t find any on the higher of the two sites so maybe they don’t last as well the greater the elevation. It would make sense if this was the case. 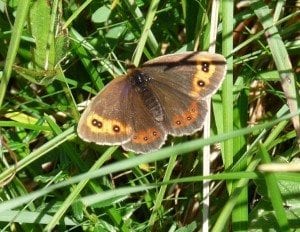 However, as Northern Browns near the end of their season, other butterflies come into to season. The Scotch Argus (see photo from last year) should be making an appearance soon, even though it is not known how they came to be in Wharfedale. Paul Millard has a Summer Visit, on the 4th of August, to Bastow Wood which is listed as “in search of the Dark Green Fritillary and the Scotch Argus” in our upcoming events. We hope conditions are good although I spotted two of the former at Low-ox pasture yesterday, despite it being quite windy and cloudy. Whatever the weather it is a great excuse to get out and enjoy the Yorkshires Dales and those that do go may be rewarded with some interesting finds.