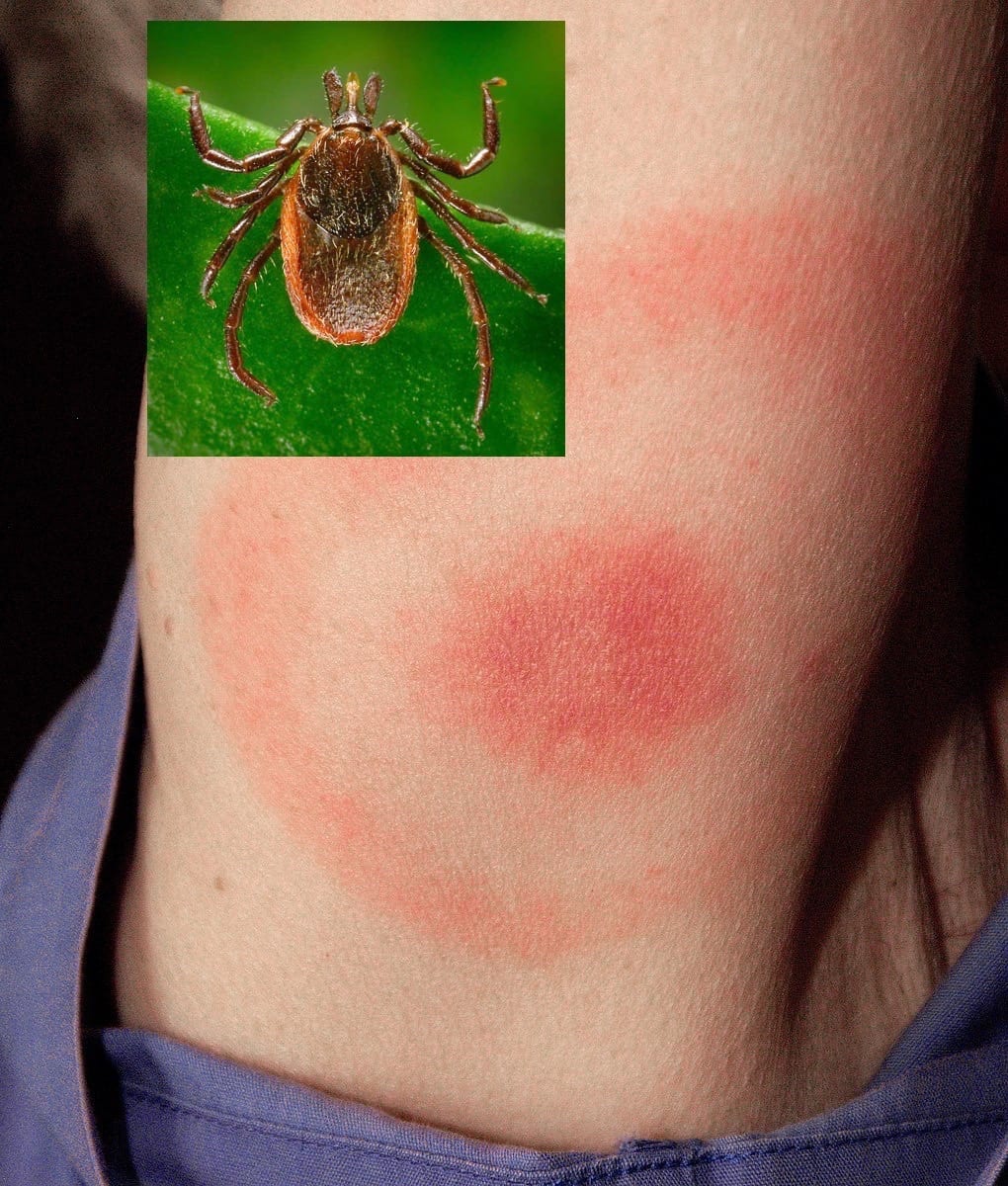 2007.James Gathany..This 2007 photograph depicts the pathognomonic erythematous rash in the pattern of a “bull’s-eye”, which manifested at the site of a tick bite on this Maryland woman’s posterior right upper arm, who’d subsequently contracted Lyme disease.

Lyme disease patients who are diagnosed early, and receive proper antibiotic treatment, usually recover rapidly and completely. A key component of early diagnosis is recognition of the characteristic Lyme disease rash called erythema migrans. This rash often manifests itself in a “bull's-eye” appearance, and is observed in about 80% of Lyme disease patients...Lyme disease is caused by the bacterium Borrelia burgdorferi, and is transmitted to humans by the bite of infected blacklegged ticks. Typical symptoms include fever, headache, fatigue, and as illustrated here, the characteristic skin rash called erythema migrans. If left untreated, infection can spread to joints, the heart, and the nervous system. Note that there are a number of PHIL images related to this disease and its vectors.

An extended version of this article can be downloaded HERE.

Last week I spent a morning rummaging around our wardrobe in the spare bedroom. It is where we keep all our outdoor gear. I have been trying on the walking and cycling shorts to see if they still fit after a winter of lockdown and checking if we need any more suntan lotion or insect repellent. Summer is hopefully not so far away, and the thought that we will soon be able to spread our wings and travel that little bit further afield, fills me with optimism.

A promise of warmer weather, has also prompted a common topic of conversation amongst us naturalists, tick bites and Lyme disease, and hence the writing of this article.

Lyme Disease was surprisingly only recognised as recently as 1975, and described following an outbreak in Lyme, Connecticut, which is how it eponymously got its name. The cause was discovered in 1981 by a Swiss-born American scientist Willy Burgdorfer to be a bacterial infection (Borrelia burgdorferi), transmitted to humans through a bite from an infected tick.

Ticks are found in woods, heaths, and moorlands, in fact anywhere where you have long grass. There are estimated to be approximately 3,000 cases per annum throughout the UK, although the Lake District, North York Moors, southern England and the Scottish Highlands, have all been singled out as having a higher incidence. Before discussing how to diagnose, treat and prevent Lyme disease, I wanted to understand “what makes a tick tick!” and have a closer look at their fascinating biology.

Ticks are tiny, spider-like creatures, which feed on the blood of animals. They are not like other blood-sucking invertebrates: mosquitoes, fleas and midges, all of which are insects with six legs and three body parts. Ticks are Arachnids, with eight legs just like spiders but just one body part compared to the spiders’ two.

The main species responsible for Lyme disease in the UK is the Castor Bean tick (Ixodes ricinus) sometimes also known as the Deer or Sheep tick. It amazingly has four life stages: egg, larva, nymph and adult, and requires three different hosts to complete its two to three year life cycle.

As the tick develops from egg, to larva, to nymph and finally adult it increases increase in size, finally reaching 11mm as an adult, engorged with blood. Each stage has its preferred host species, larvae and nymphs preferring small mammals especially small rodents. It is only the adult tick that chooses larger mammals: sheep, deer, dogs, and of course us, finding their host by “questing”. A questing tick climbs upwards, positioning itself on a blade of grass, a leaf or other vegetation. It stretches its hooked limbs outwards and waits for a host to pass by, before hopping aboard. Having had its “Last Supper” of blood it then drops to the ground and the female tick lays its eggs, allowing the cycle to start again.

Those of us who work or spend time in the countryside just need to be “tick aware”. In areas of long grass, wear long trousers tucked into socks, preferably also long-sleeved shirts using insect repellent on both skin and clothing. Once home check both your clothing and skin; important places to look include behind the knees and groins, and the head and neck in children, in fact anywhere warm and moist.

If you find a tick, in the words of Corporal Jones of Dad’s Army “Don’t panic!” Most tick bites do not transmit Lyme disease and ticks can easily be removed. Remember also they need to be attached for twenty-four hours before the disease can be transmitted.

If you have been bitten, remove the tick using a pair of fine-tipped tweezers. Grasp the tick as close to the skin as possible. Pull upwards and firmly, as mouthparts left in the skin can cause a local infection. Once the tick is removed, apply antiseptic to the skin or wash with soap and water, keeping an eye on the area for several weeks for any changes.

In the unlikely event you do become infected and develop Lyme disease, what are the symptoms? The most important is a rash, reported in 70-80% of cases, developing any time from three days after the initial tick bite, to four weeks later. The rash, (known medically as erythema migrans) is usually painless and not itchy, gradually increasing in size and has a central clearing that gives the appearance of a bull’s eye.

A tick bite can also cause a local inflammatory reaction that typically commences within 48 hours. This is different from the rash of Lyme Disease, and is usually itchy, painful, and warm.

Not everyone will have the classical rash, some may just have non-specific “flu-like” symptoms of headache, and malaise, joint or muscle aches and occasionally fevers. That is the time for blood tests, especially in someone in an at-risk occupation, remembering a negative test does not rule out Lyme disease if the suspicion remains high. Blood tests are something beyond the scope of this article, but if there is a high degree of clinical suspicion this should not stop treatment. NICE guidelines recommend a three-week course of the antibiotic, Doxycycline.

If it was only that simple? A small number of people have either no early symptoms or the rash is missed (especially as it is non-itchy, painless, and often out of sight behind the knee) and present late. This is where it gets difficult, like other post-infective disorders such as long Covid, or chronic infection (the jury is still out as to the most likely cause), either way it is poorly understood. Blood tests are unreliable and the symptoms are often non-specific with a very long list of other potential causes. There needs to be specialist involvement, but for anyone with a past history of a tick bite or deemed at risk presenting with unexplained neurological or cardiac symptoms, arthritis, or skin rash, then Lyme disease needs to be considered.

If all that leaves you not wanting to leave the comfort of your own home, watching the nature courtesy of Chris Packham and David Attenborough, don’t worry. Just be tick aware and take simple precautions. The wonderful British countryside is there ready to be explored and welcome you back. I am certainly heading out this spring and summer, the walking boots and bike are ready and nature beckons, so let’s get out there and enjoy.