The search of a rare day-flying moth 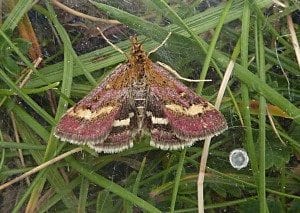 John Gavaghan set out on a quest to find a rare day flying moth, the Heath Rivulet, after reading in Argus that it had only been found at one site in our county, and was seldom recorded. Restricted to using public transport, he continued searching for several years finding many other interesting species along the way including Pyraustas purpularis, Pyraustas ostrinalis and Philedone gerningana, in 2011 at Dib Scar. After more visits in 2012 and 2013 all efforts had so far proved fruitless but Paul Millard suggested trying another location alongside the northern boundary wall of Bastow Wood. Unfortunately his search was put on hold in 2014 because of poor weather but this made him all the more determined to step things up in 2015. 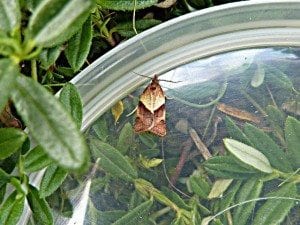 On Yorkshire Day, 2015 he set off on his quest once again, this time at Bastow Wood. This visit he found himself sheltering under a bush for much of the time but he returned again six days later and as well as observing many different butterflies including Small Heaths, Dark Green Fritillaries, Ringlets, Meadow Browns, Small Skippers, a Common Blue and what could have been Scotch Argus, he photographed a small grey moth that seemed to fit the bill. It was a let-down, however, when it was not possible to be certain this was a Heath Rivulet because it was a bit worn.

Thinking that was it for 2015, nine days later on August 15th John’s wife suggested a walk out to the Grass Wood area and said she didn’t mind if they spent some time looking for this illusive insect. Rather than walking up the Dales Way they approached Bastow Wood from Grass Wood Lane. After another quick search and positively identifying what he had previously seen as Scotch Argus he decided not to try his wife’s patience any longer and they both re-joined the path back to Grassington. Shortly afterwards he heard his wife shout that something had landed on her T-shirt. On viewing the culprit through his binoculars he was amazed to find his search could be over. He managed to get several good photos and tried to contain his excitement at least until he viewed his photos at home.

When back at home, he compared his photos with those in his moth book and was confident enough to send them on to Paul Millard who forwarded them on for a third opinion. He was elated when the reply that came back was “Well done John. No doubt a Heath Rivulet”!