Salmon leaping the weir in Otley

We had a report on Saturday, October 31st of salmon leaping the weir, in Otley, from Valerie Aldridge and there have now been other reports. A video was also uploaded to YouTube the following day. Please let us know if you saw this too! 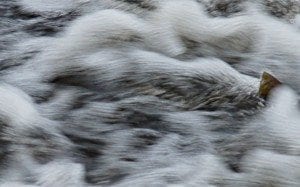 This has since been documented by the Ilkley Gazette, November 5th. Back in 2007 this article was written by the Wharfedale Observer, which talked about the possibility of creating more fish passes on the Wharfe. After visiting the weir today, the fish were struggling with the obstacle but that doesn’t rule out the possibility that some will make it upstream. A fish ladder was created in Wetherby specifically for this purpose, making use of an old fish trap, and back in 2000 a statue of two leaping salmon was erected to celebrate their return to the river.

In 2011 conservationists reported salmon numbers to be increasing in UK rivers but they didn’t know why and whether it was a one-off occurrence. So the question remains could this is be another indication of a general increase?