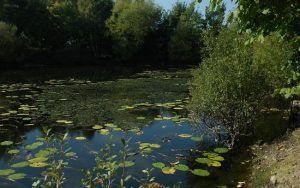 The alluvial deposits around Otley have been exploited over a number of years and have left amenity lakes to the east, as well as the west, of the town. The Bridge End site has a (pre)history stretching back to the early Neolithic, over 5500 years ago. It consists of water areas, recently-planted woodlands and reedbeds, rough grassland and stream edges. The Reserve is part of a larger area of complementary uses, including a yachting lake, improved grazing land and mature woodland.

It now hosts toads, frogs, shrews (Common and Water), Bank Vole and Wood Mouse, Noctule and Pipistrelle Bats, stoats, otters passing through and, unfortunately, mink. The dragonflies and damselflies are a feature of this site, with 21 species recorded, of which 14 have bred. The flora includes an extensive area of Common Spotted Orchids, Marsh Orchids and some Bee Orchids, Red Bartsia, Creeping Jenny, Changing Forget-me-not and Gypsywort, all of which are local in the area. Birds include Reed Warbler, Reed Bunting, Sedge Warbler and Common Tern which all breed on the reserve or immediately adjacent, together with Mute Swan, Canada Goose, Mallard, and Lapwing. Visitors include Red Kite, Peregrine, Osprey, Little Egret, Wigeon, Teal, Pintail, Smew, Goosander, Water Rail, Barn Owl, Little Owl, Kingfisher, Waxwing, Redwing and Fieldfare.

The Sun Lane Reserve is a former tip, owned by Bradford City Council. It has been the site of many unusual flower records over the years. It was landscaped and turned into a nature reserve by the Council, with polluted drainage water channelled into a series of reed beds to purify it, then draining into a small pond with a reedbed. However, it became neglected and, , Wharfe Nats have contributed to a local Group who have taken it in hand and cleared it again. The pool has Bogbean
and Water Violet. Marsh Orchids and Purple and Yellow Loosestrife are to be found.

Ben Rhydding Reserve is owned by Bradford City Council. Covering 4 hectares and bordering the Wharfe, the former gravel pits have been largely in filled. The site developed considerable botanic diversity. With over 300 vascular plant species and the varied nature of the habitats helping to support good faunal diversity. As a result it was designated a Site of Ecological or Geological Importance (SEGI). However, the site deteriorated with infestations of invasive weeds and over-grazing by rabbits. The once extensive orchids for which the site was noted have not been present for several years. Concerned by this, in 2007 Wharfedale Nats became actively involved in managing the site, including running monthly working parties- of which the summer balsam bashes are particularly popular!  In May 2014 it was designated a Local Nature Reserve in recognition of the improvement in biodiversity thanks to the efforts of dedicated volunteers.

The Grass Wood Reserve is owned and managed by Yorkshire Wildlife Trust. Wharfedale Nats have had a long association with it and provide many of the volunteers who have begun the long work of stripping out the alien species planted in Victorian times and in the 1960’s. The felling is done professionally but the replanting is with sprigs grown from local seed by Wharfedale Nats. Much remains to be done and the work will last for decades.