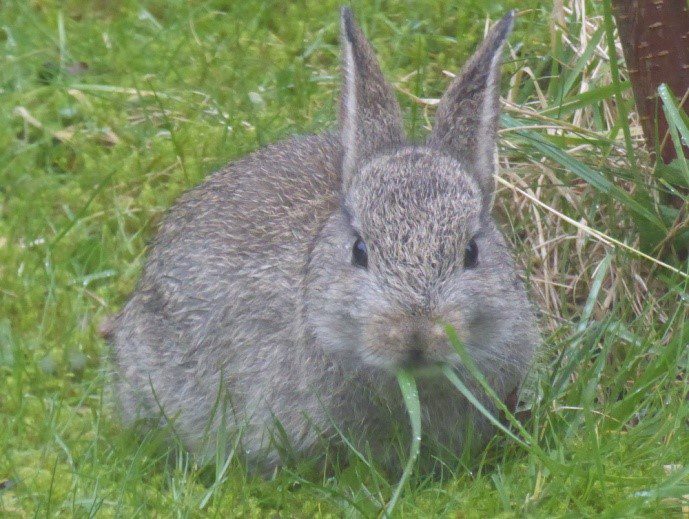 As winter storms battered the country in the third week of February, signs of spring emerged from the bramble patch growing up against our house wall. Three of the smallest rabbits I have ever seen scampered about the grass, at times running up to their mother sitting watchfully in the middle of the lawn.

Several times she allowed one or two of them to briefly nuzzle up to her but most of the time she chased them back towards the bramble patch. Her message was not clear. Was she telling them not to stray too far from the safety of their burrow or was she saying that from now on they had to fend for themselves?

Female rabbits can be protective of their young, at least while they are very small. Years ago, when my wife was working at Manchester Children’s Hospital, outside the unit where she worked was an aviary containing budgerigars, finches, doves and a male golden pheasant. Rabbits and guinea pigs were then added and on one occasion she saw a baby rabbit go up to the pheasant and begin to lick its legs. Its mother then ran over and literally boxed its ears as much as to say, “You stupid boy!”

All three young appeared again for the next two days although the mother was less in evidence. However, after I disturbed a large ginger cat from the centre of the bramble patch, I never saw more than one of the babies. The cat could only have been there for one purpose and the rabbits, given their young age and total inexperience, would have been easy prey.

The one small survivor (pictured a week later) then appeared regularly, feeding independently without adult supervision and I speculated as to how soon young rabbits, once out of the burrow, are expected to become self-sufficient – after about three days if this youngster was anything to go by.

The life expectancy of a rabbit is very short with 90% not surviving their first year, the majority dying within three months. They are an important link in the food chain for many predators such as foxes, badgers, stoats, weasels, owls and buzzards.

These predators have always been an important factor in controlling rabbits. In the 19th century rabbit numbers increased dramatically to become major agricultural pests due to increased cereal production but also because large numbers of predators were being destroyed by keepers on large shooting estates.

They are killed by disease with myxomatosis decimating the population in periodic outbreaks ever since its introduction in 1953. Another danger is rabbit viral haemorrhagic disease, which has now mutated into a new, more deadly strain.

As to the cat, there are ten million domestic cats in the UK and it is estimated that they kill as many as 180 million small birds and mammals every year. A difference between the cats and the wild predators is that the latter eat what they kill whereas most cats do not, being well fed at home.

Given that cat owners are hopefully concerned about wild creatures as much as their pets, perhaps they should consider fitting their cat with a bell. Cats are ambush predators and a study has shown that bell collars reduce the number of birds and small mammals killed by 60%.

They could also think about keeping their cat in overnight, given that many small mammals are nocturnal and that birds are vulnerable to predation just after dawn when they feed after waking.