Message in a bottle 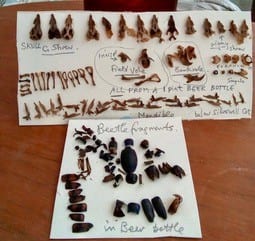 It happens every time. Whenever I’m stuck for a Nature Notes topic, a fellow naturalist – friend, family, WNS member – contacts me with an observation and a “perhaps you can use this.” It happened this month – and it’s a cracker of a story.

A friend who lives on the edge of Ilkley Moor and walks there most days, conscientiously picked up a discarded beer bottle near Silver Well Cottage and carried it home. Not an antique – just quite an ordinary glass bottle, but she noticed it was rammed full of stuff so, being a scientist, she carefully unpacked it and sorted the contents. (Don’t read this while eating your breakfast!).

The main packing proved to be fur, within which appeared a large collection of small bones and skulls and bits of black (probably Sexton) beetle The skulls were easily identified – a couple of voles and lots of shrews, 12 common shrews and 3 pigmy shrews. What had been going on?

Shrews are tiny insectivores with sharp pointed snouts, short fur and fairly short tails. You’ve probably encountered them, scooting around on moorland paths or even in the garden. Shrews live in the fast lane – they have short lives, and a rapid metabolism that requires them to eat constantly so their time is spent racing round their familiar territory in pursuit of the next meal. Failing this, they just run down like clockwork toys. The sad case of the discarded bottle was becoming clear.

I guess what happened is that the first shrew was lured in by the delicious smell of beer residue and, for some reason (lobster pots come to mind), couldn’t get out and died there (one hopes in a happy drunken haze). Later more shrews – attracted by the whiff of carrion and the promise of the larvae that aid decomposition – also entered the death trap until, eventually, the bottle was full of their pathetic corpses.

The careful process of teasing apart and identifying the contents reminded me of happy hours I have spent examining owl pellets. Like other birds of prey, owls swallow their victims whole and then their clever digestive organs separate the indigestible bits – bones, feathers, beetle wings- and parcel these up, and the roosting bird regurgitates the neat package, evidence of diet and resources within the environment. The key difference is that I was uncovering evidence of a healthy eco-system in operation, my friend was examining a kind of crime scene. The moral is clear – we should always bring our litter home to dispose of properly and we should also collect any left by other, less thoughtful, people.