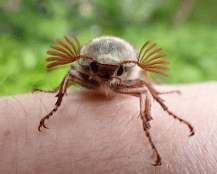 May is a strange month for moths. Butterflies are seen on the wing frequently,  but while daytime temperatures are warm, and my shorts make an appearance  after their winter hibernation, the nights remain cold. In early spring-time,  nectar from food sources such as sallow catkins provides sustenance to many  moth species. Once such catkins have gone to seed the number of moths flying  at night plummets. It is not until the night-time temperatures improve, along with  the sudden abundance of flowering plants, towards the end of May, that most  of our summer moths begin to emerge.

Attracted to light, a fairy-tale insect that can often intrude the moth trap, at this  time of year, is the cockchafer beetle Melolontha melolontha or, as they are also  known, May bugs. Cockchafers have a lifespan of around three years and spend  most of it underground. First as a larvae, off-white in colour, and then as a beetle poised to emerge in the spring. Habitat wise, grasslands and meadows are  favoured. It is not always safe underground though, the larvae are also known  as rook worms as rooks have developed a taste for them. Life above ground is short at just a few weeks, but there is enough time to feed-up and lay eggs from which the next generation will hatch.

Upon finding a cockchafer in the moth trap for the first time I was both intrigued  and alarmed. They are similar in size to a thumb. While harmless, cockchafers  have a hard shell that is deep red in colour, sport white crocodile teeth markings  down their flanks, exhibit antennae to rival the antlers of a stag, and are adorned  with a somewhat intimidating abdomen that looks like a sting. In days gone bye, children would tie a length of linen to the leg of cockchafer and with arm outstretched watch them whirl around for entertainment.

Moonlighting in Airedale last week, I joined an evening of moth trapping at  Bingley St Ives. While concerns were aired about clear skies and a near full moon (which moths prefer above the artificial light of a moth trap), four traps were  set. Ninety-six moths of 37 species were recorded with pebble hook-tip, water carpet and scorched wing among the highlights and names that equally fascinate. The  cockchafers were drawn in, too. Outnumbering the moths by a small margin.  Whizzing in like miniature helicopters I watched with interest the reaction of  others. Photos were taken, but I could not convince the others to let one wander  over their hands.

Sometimes it can feel like a bit mission to convince people about the wonder of  insects. They are not going to snatch you, you are just too big. And six legs are  beautiful, unlike our two.