Almost without noticing, in the botanical relay, the pinkpurple baton has been passed from Red Campion in the late spring, to Foxgloves in early summer and now, as we enter the second half of summer, it is Heather. It turns our moorland into a purple carpet that stretches for mile after mile.

For me, Heather will forever remind me of my father who regularly placed a sprig through the radiator grille of our ancient Austin A30 for luck. A blue RAC or yellow AA badge may have been a better investment! I am however very pleased that I inherited his optimistic view on life. 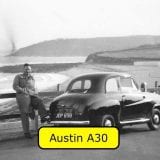 What we commonly refer to as ‘Heather’ could be one of three main species. Heather moors covering the millstone grit slopes above Ilkley and Bolton Abbey are almost pure Common Heather or Ling (Calluna vulgaris). There is only the occasional plant of Calluna’s more attractive siblings:Bell Heather (Erica cinerea) and Cross-leaved Heath (Erica tetralix), having darker purple and dusky pink coloured urnshaped flowers respectively. Both Erica species start flowering in June, but you will have to wait until later in July for the main event, when Calluna decorates those moor tops in a blaze of colour.

This is when our local beekeepers move their hives up to the moors for that much sought after ‘heather honey’. On a warm summer’s day, just sit quietly and listen to the buzz of all those bees collecting nectar and returning to the hive. The bees fan their wings, evaporating the water, gradually concentrating the weak sugary nectar solution to produce honey. The water content falls to just 20%, the remaining 80% a mixture of sugars. Honey is not just a tasty spread for your morning toast but also a valuable winter food store for the colony. The high sugar content preserves the stores, preventing any fermentation. 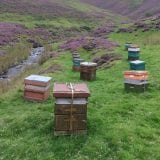 It is often forgotten that most of the world’s Heather moorland is found in the UK, so it is a valued habitat, rarely seen beyond our shores. It is these upland areas, which also provide nesting sites for some of the Dales most iconic birds, the Curlew, Golden Plover, Skylarks, Meadow Pipits and Cuckoos.

I leave you with the thought that although it often looks wild and empty, our heather moorland is not natural. The stone crosses and boundary markers remind us of man’s influence in the past, and of the farmers’ and landowners’ management today.