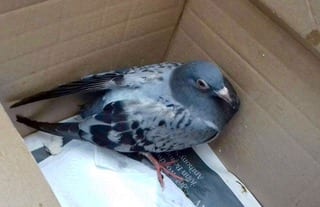 Now more than ever we crave stories with a happy ending. Over the years I have collected a number of these – none long enough for a Nature Note but all ecologically interesting. Recently another joined the collection, so today I’m giving you good news!

We’ve all suffered the distress caused when a bird – usually an inexperienced youngster – flies “Bang” into a window and drops lifeless onto the garden below. Even if not killed outright, it’s likely that the victim has fatal injuries. But still, eternal optimists, we try to help. We put it in a box in a quiet dark place with a small supply of food and some water, returning in the morning to find a lifeless corpse. But not always. A few weeks ago, a friend’s daughter picked up such a casualty, put it in a box, brought it home and, since it was still alive though stunned, took it to the vet. Here it was examined and pronounced injury free. It could walk and should be able to fly. The patient, a pigeon, was lovingly cared for – it ate, walked about in the garden but showed no interest in flying. Had it forgotten how? Was it just comfortable where it was? This continued for some days until….While it was enjoying daily exercise outside, my friend noticed with horror a local cat stalking it. Drama! Man yelled, cat pounced, pigeon took off, flapped a bit, then soared upwards and disappeared. 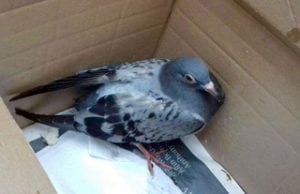 We once had a similar experience with a great spotted woodpecker. It lay inert below the sitting room window. Dusk was imminent – if left it would be easy prey for fox or cat. My husband donned gloves and picked it up. It gave a loud squawk then relapsed into inertia. We followed the box procedure and left the patient in the garage only to be roused in the early morning by insistent tapping. Had it escaped? Was it beating itself against the closed door? I cautiously approached. There was the box – but with a neat round hole drilled in each side. Seeing only darkness, the bird had stayed roosting inside. I opened the box and it shot off down the drive and away!

These tales go in the collection along with others: a) the grass snake, interrupted with a frog head-first down its throat, so alarmed that it gaped and fled, (the frog hopped away unharmed) and b) the red squirrel that bit off its own infected toe and lived happily ever after. 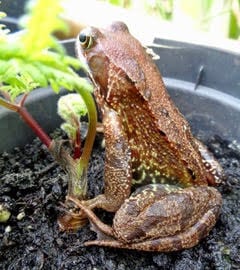 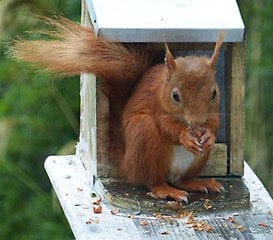