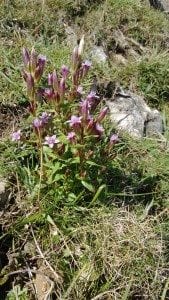 Earlier this month we had a report of Autumn Fellwort from Maralyn Chapman, above the mine shaft at Trollers Gill, on the 6th September. It was unlike most plants I had come across before so I thought it was worth mentioning. Nicky Vernon, our resident botany expert, kindly sent Maralyn information of previous sightings in the area.  She was very grateful and sent us this great photo in her reply. Nicky’s comments on Fellwort are as follows:

Fellwort is a delightful plant, and it has a rare colour form (white inside, reddish outside) called “septentrionalis”. It also has an earlier-flowering close/similar relative called Field Gentian (Gentianella campestris).

Field Gentian is one of the Threatened Plants that the Yorkshire Dales National Park is trying to update its records on. It has had losses of sites nationally, although the Dales is not thought to have been affected. Nicky would be very pleased to encourage recording of any of these.