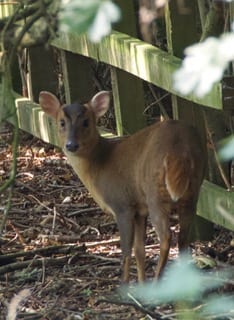 Although arthritis and Lockdown keep me tethered, I’m lucky in my family. The younger, still very active members keep me supplied with stories, observations and, often, photos to go with them. Stepson Rob and daughter-in-law Pauline spend their free time exploring the country parks near their Midlands home either on foot or by canoe, and it was on one of these expeditions that they spotted a small brown deer stepping daintily through woodland. It was not a species familiar to me, but given their location, I guessed what it was and further research confirmed the identification. It was a female muntjac, a non-native species which has now become an established part of our English fauna. The first muntjac escaped from the collection at Woburn Abbey, found habitat to their liking and quickly expanded their population.

We tend to view non-native species with suspicion: Japanese knotweed, N. American mink, Harlequin ladybirds – all have had a devastating effect on the environment. Actually, though, we owe much of our biodiversity to species introduced from elsewhere – plants and animals that have found an empty niche, slipped quietly into our countryside and often become so familiar that we are unaware of their origins. Think brown hare, little owl, snowdrops, and, of course, rabbits! Often these introductions were for food or sport so, not surprisingly, include species of deer. Native are red and roe deer, fallow were introduced into hunting parks long ago and later came sika. Recently reindeer have been reintroduced domestically and muntjac and Chinese water deer have made their unobtrusive escape from exotic collections.

Here in Wharfedale roe are common and easy to spot around Ilkley. Small (only 65 – 67 cm at the shoulder) with a white rump patch, a white moustache and pelage varying seasonally from grey-brown to ruddy-brown, they live in small family groups, lie up during the day in dense scrub and emerge at dusk to browse in pastures, parks and gardens. There are some red deer in Wharfedale. I remember a lonely stag which spent its time with the sheep in a field above Denton. If you want to see the full rut spectacle – playing out now – just go to Fountains Abbey where there is a mixed herd of red deer (the stags with huge, many pronged antlers) and fallow deer (similar size and behaviour, but the stags having heavy palmate antlers).

There have been a couple of possible sightings of muntjac over the years, but it’s only a matter of time till this shy, slender creature moves in.