A good example of an agri-environment scheme in action can be found on the road between Ilkley and Askwith, near Crook farm. Alongside the field, the Denton Hall Estate has planted a flowery border which is now in full bloom and has subsequently been exploited by the bees and butterflies. One of the plants, Phacelia (Phacelia tanacetifolia) looks quite alien in its surroundings but not only does is it act as a good source of nectar, it is used as a ‘green manure’ and can be ploughed into the fields shortly after it stops flowering. Other plants in the mix were Quinoa (Chenopodium quinoa), a grain crop known for its edible seeds and Borage (Borago officinalis), a flowering plant native to Mediterranean regions. 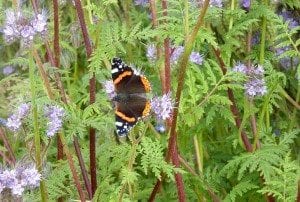 As well as the additional wildlife benefits, such schemes can return valuable nutrients to the soil reducing the reliance on traditional fertilizers and provide farmers with additional subsides. Yesterday twenty-six Red Admiral butterflies certainly appreciated the farmer’s efforts!