“A Flower for Wharfedale” – The Final Results

You have read the articles, attended the botanical hustings, and voted in your hundreds! The votes have been counted and now is the moment to reveal the results of the contest for “A Flower for Wharfedale”.

It has been a close-run race with no flower disgracing itself, unlike the UK’s frequent showing in the Eurovision Song Contest! Any one of the ten flowers vying for your vote would have been a worthy winner, but there is only one and that is the Foxglove (Digitalis purpurea), which achieved the greatest number of votes.

The full results are:

I believe it is an excellent choice, flowering as it does in early summer. Suddenly growing rapidly, shooting skywards like a rocket taking off, producing a spike of pink-purple flowers, it is instantly recognisable – always an important attribute for an emblem. The Foxglove is loved by many and found throughout the whole length of Wharfedale in hedge-banks, woodland clearings, and on cliffs, fells and moors. 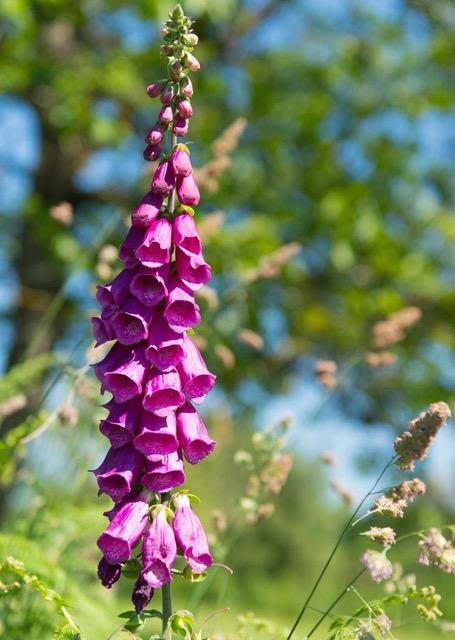 Foxglove “Our Flower of Wharfedale – Flowering in early summer, suddenly shooting skywards like a rocket taking off, producing a wonderful spike of pink-purple flowers. 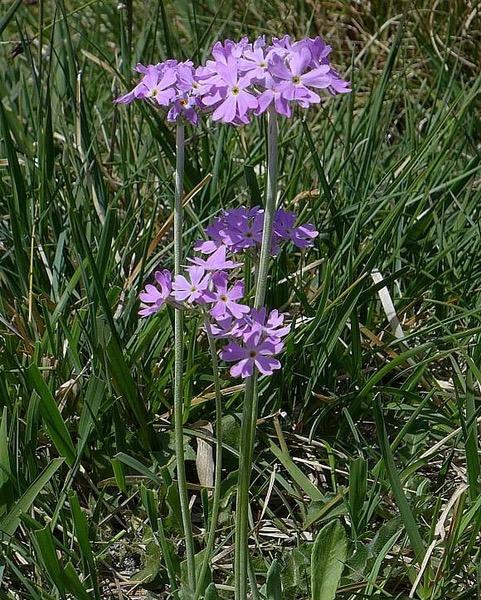 Bird’s-eye Primrose, a worthy runner up. If you have not seen this beautiful member of the primula family, then I encourage you to head to Upper Wharfedale in May or June. 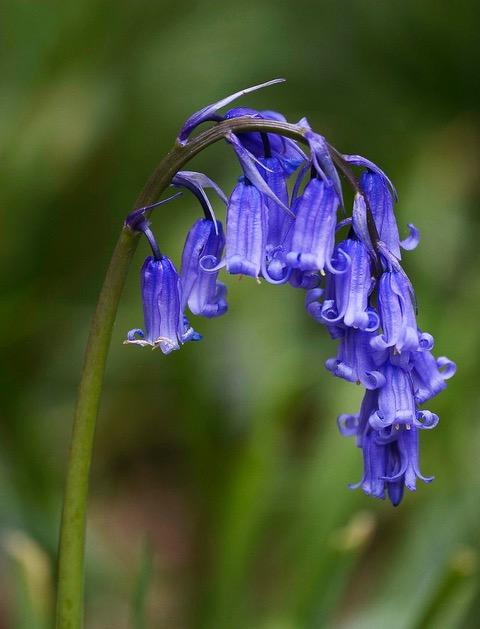 Bluebell, The UK’s favourite flower, managing a respectable third place in our poll. That carpet of intense blue under the opening canopy is one of our greatest woodland spectacles.

Bloody Cranesbill, Lady’s-Slipper Orchid, Bird’s-eye primrose are all splendid but would have represented more the upper dale. Likewise Bluebell, Gorse, Heather and Bilberry are more commonly associated with the lower dale.

Foxglove was also a popular choice in the charity Plantlife ‘County flower’ campaign of 2002, second only to the bluebell.

Foxglove is a stunningly attractive plant, but it is not just a pretty face. It has a close and intriguing relationship with bumblebees, and also with humankind as the source of the cardiac drug Digoxin. Sit back and let me tell you more about this amazing flower you have chosen. 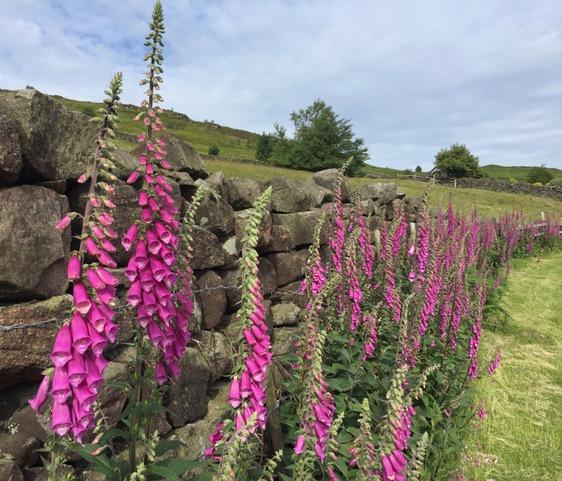 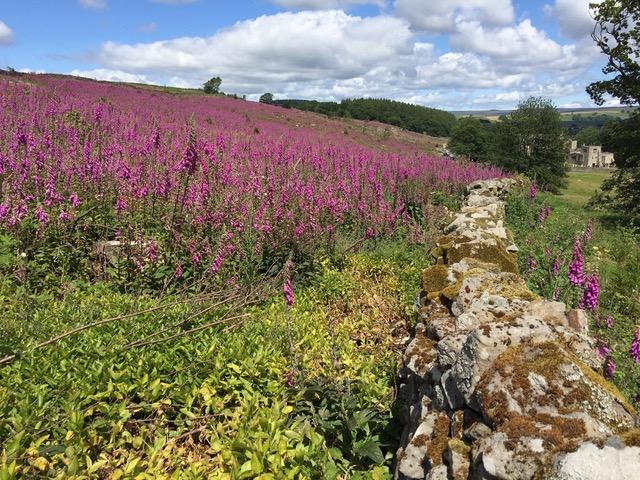 Foxgloves flowering in profusion opposite Barden Tower, near Burnsal in 2019. This phenomenon commonly occurs for several years following tree felling

Firstly would you like to grow Foxgloves in your wildlife-friendly garden? I do in mine. Collect its seeds later this summer and scatter in the desired area. You will have to wait until the summer after next to enjoy those purple blooms because Foxgloves are biennials, taking two years to complete their life cycle.

In the first year the plant produces a rosette of leaves close to the ground. They then need a cold spell or vernalization before they flower. During the second year the stem greatly elongates, often growing to 1.5m before producing a plethora of flowers in the form of a spike or raceme. The individual flowers mature one at a time from the bottom upwards for an extended period of time, enticing pollinators to come day after day. This maximises cross-pollination, as the visitors must feed on many different plants each day. Each plant can set up to a million seeds by late summer, so no surprise that it is one of our most common plants.

The origin of the common English name Foxglove remains a mystery. However, the scientific name for Foxglove, Digitalis purpurea is well chosen from the Latin (digitus) meaning finger or digit. The tubular flowers are the right size and length to fit over the end of a small finger. Next time you are out with younger members of your family, try using the flowers as finger puppets. I am sure there is a children’s story book there waiting to be written!

The flower is also an excellent fit for a bumblebee and these are the main visitors and pollinators. Everything about the Foxglove flower seems designed to accommodate just this one insect. The elongated, enclosed flower or corolla tube produces nectar at its base that only long-tongued bumblebees can reach, while guard hairs prevent smaller bees and insects from entering.

Bumblebees are just the right size, shape and weight to plunder and pollinate these tubular flowers. The Garden and Common Carder bumblebees whose tongues extend to 20mm (that’s more than the length of their bodies) are perfect, compared to the honeybees more limited 9mm tongue.

After landing on the lower lip of the flower, which acts as a landing platform, they squeeze themselves forward, the anthers depositing copious pollen on to their backs. It is a case of “I’ll scratch your back, if you scratch mine”. Foxgloves get pollinated and the bees get fed. Foxgloves cleverly go one step further in tempting a visit. The white and dark purple blotches on the flower are not just there for decoration; they act as nectar-guides, both attracting the attention of passing bees and directing them to their sugary treat. Don’t forget bees will see the world differently from us, with their vision including part of the ultra-violet spectrum. 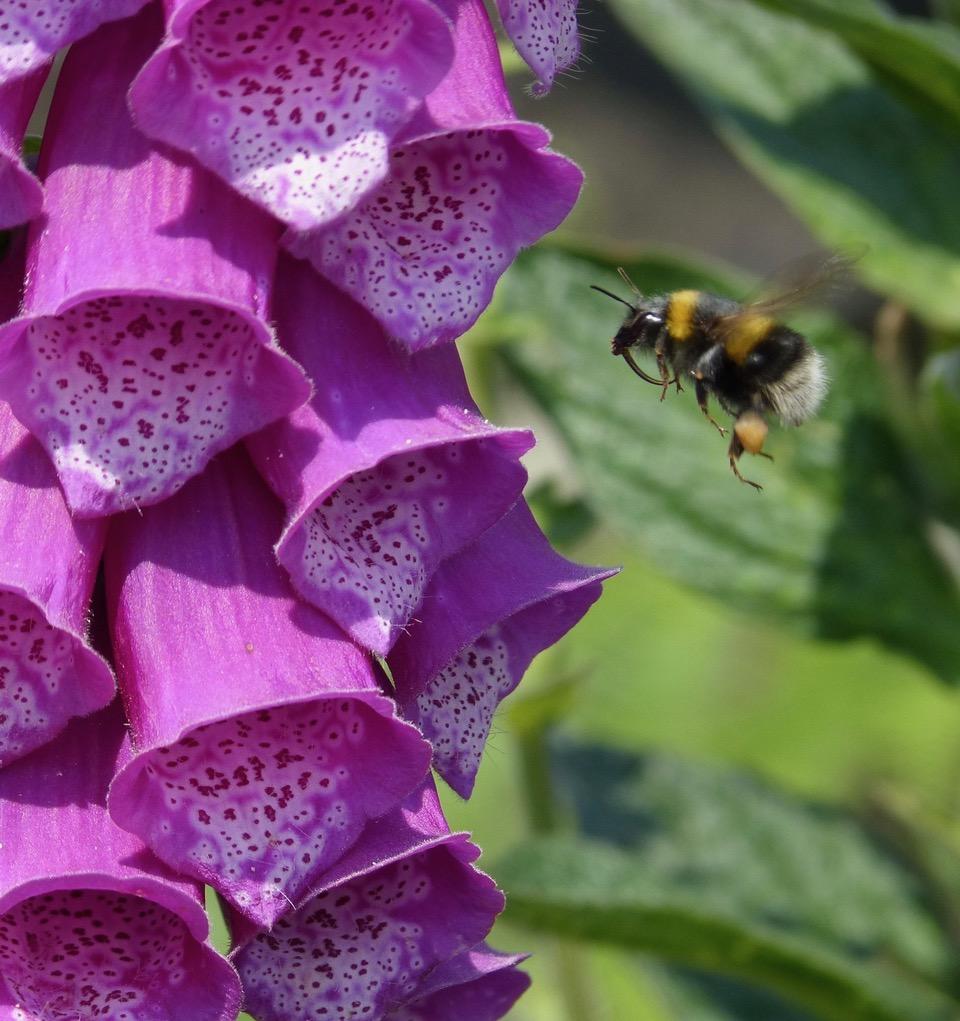 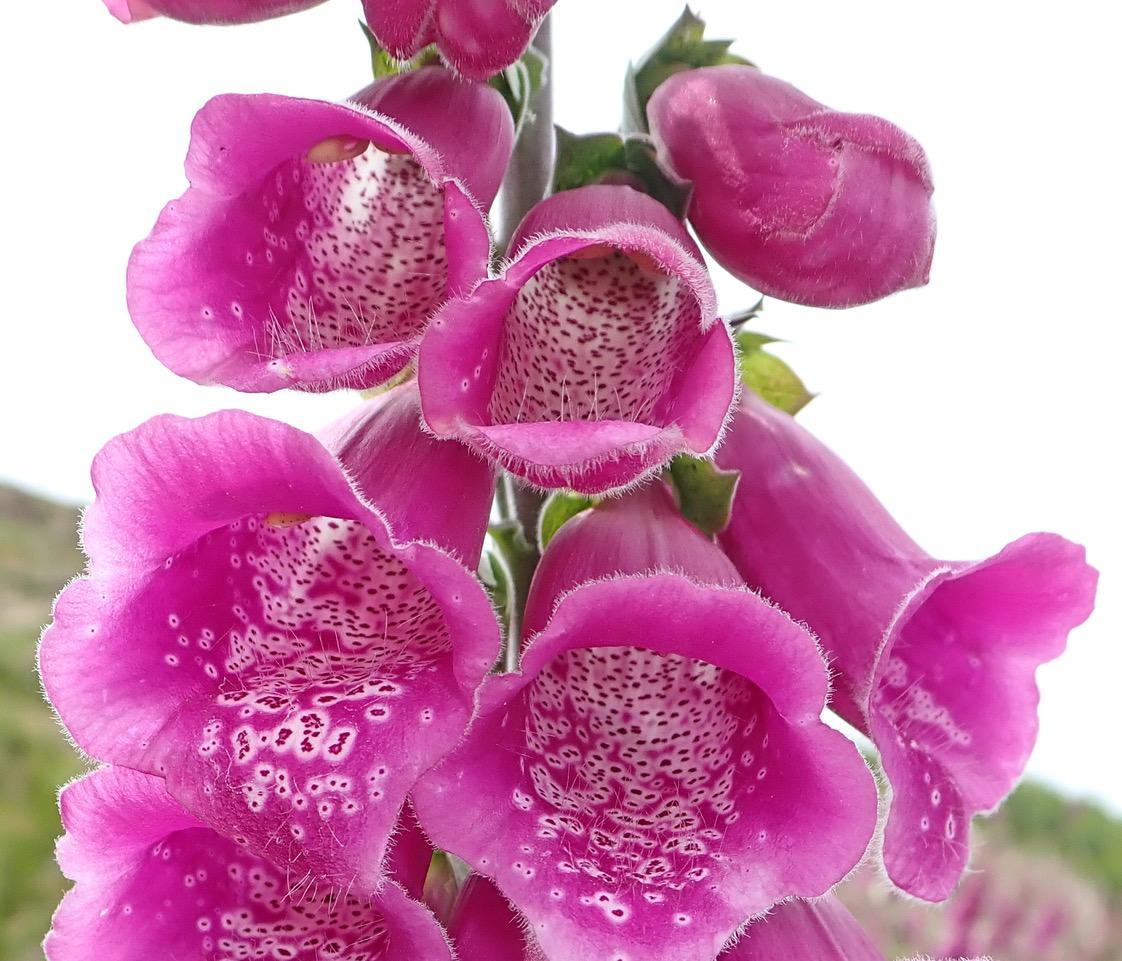 The white and dark purple blotches act as nectar-guides, attracting the attention of passing bees and directing them to the nectaries. Guard hairs are seen at the entrance to the top left flower. Photo curtesy of Anne Riley

It is not just bumblebees that have a close association with this beguiling plant but humankind as well. It was William Withering in 1785, a physician from Birmingham who discovered the Foxglove’s medicinal use and in so doing the start of the development of modern pharmacology. Withering began to investigate its use when he examined a lady who was suffering from dropsy (now known as heart failure). He had expected her to die given the severity of her condition but on being given herbal tea from a Shropshire herbalist, Mrs Hudson, she made a dramatic recovery. Withering was told that the remedy contained twenty or more herbs. He systematically investigated the active ingredients and discovered foxglove responsible, although it was not until 1930 that the active drug; digitoxin was isolated at The Wellcome laboratories.

A related compound digoxin was subsequently isolated from the Woolly Foxglove (Digitalis lanata), a native of Eastern Europe and found to be more effective and safer, and is today the drug of choice. The drug is still produced from the leaves of the Woolly Foxglove, an exception being during the Second World War when due to shortages the Women’s Institute were enlisted to gather large quantities of our native plant.

Digoxin works by strengthening the cardiac muscle and slowing the heart rate and is now mainly used to treat Atrial Fibrillation (AF), which affects one million people in the UK rather than heart failure.

A note of caution, Foxgloves are extremely poisonous because of their cardiac effects and should never be eaten or made into herbal tea.

Finally on behalf of the Wharfedale Naturalists can I thank you all for getting involved and helping us celebrate both our 75th anniversary and the rich botanical flora of Wharfedale. Visit our website www.wharfedale-nats.org.uk to find out more and read the original article which started our quest.

If you have enjoyed spending more time exploring the local countryside during this pandemic, engaging with nature, then why not consider joining us? At just £12.50 this includes in any normal year; field trips and evening walks in the summer. During the winter months a series of indoor evening talks, as well as the monetary support we donate to many local conservation groups.

In addition, I encourage you to look at:

I would like to thank Catherine Burton, for organising the website vote and Peter Riley, President of Wharfedale Naturalists for his generous support and time. Of course none of this would have happened without the Ilkley Gazette, Wharfedale Observer and Craven Herald for which I have Claire Lomax to thank.