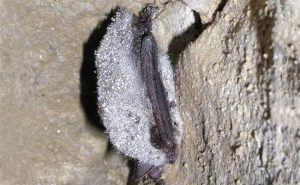 In the article I wrote for Yorkshire Wildlife four years ago, I ended by saying that our research will always be a work in progress, since every question answered generates more questions that need answering. I continue to live a privileged life, working with a team of skilled, enthusiastic and perpetually cheerful PhD students, to better understand and protect one of nature’s most fascinating groups of mammals. Although our research takes us across Europe and beyond, it is still firmly based in Yorkshire, and in particular the Dales.

Bats in the Dales
We have been studying Daubenton’s bats in Wharfedale for over a decade and know some of the bats so well we are on first name terms – many of those ringed at the beginning are still alive and well. In the last article I left you with a question: Why are there only male Daubenton’s bats high in the dale around Buckden and Kettlewell, and does this prevent them from becoming fathers to the bats born in nursery colonies down the dale in Grassington? Using genetics techniques (which do not harm the bats) to study paternity, Paula Senior was able to answer this with a firm yes. It seems that a minority of dominant males roost with and monopolise the females and father most of the pups. Natural selection rules and only the fittest males pass on their genes.

However, the story, as always, is not quite so simple. First of all, the males of the upper dale get an opportunity to mate when they visit caves prior to hibernation. In what is known as autumn swarming, hundreds, even thousands, of bats compete for sexual favour in spectacular chases in and around caves.

More recently, PhD student Ruth Angell has discovered that further downstream still, at nursery colonies in Addingham and Ilkley, males don’t share roosts with the females and presumably can’t therefore monopolise them. Do they also have to fly all the way to caves high in the dale and compete for mates during autumn swarming? Ruth, like Paula before her, is combining intensive fieldwork with the latest genetic techniques to unravel the complex social life of Daubenton’s bats. In pursuit of these eight-gram animals, her study area grows and grows, and now extends from the lead mines of Buckden Pike to the lazy river at Boston Spa.

Why do bats keep flitting?
Why is social behaviour in bats so complex and variable and why is it important that we understand it? It’s all about making the most of essential resources. To bats, and indeed most animals, the important things in life are food, shelter and mates. As habitats change (in our study, from the harsh upper dale to the more gentle lowlands) so does the availability of these vital resources. The behaviour of the bats must therefore change to make the best of what the landscape has to offer. At the centre of our research is the desire to understand this relationship between the ecology and behaviour of bats and their environment. It is this understanding that is also at the centre of conservation research, providing information vital for effective conservation management.

One of the human pressures on bats is the disturbance and destruction of roost sites due, for example, to the redevelopment of old buildings or inappropriate management of woodland. To better protect bat roosts, and potentially improve roosting opportunities, we need a better understanding of roosting ecology. Emma Rigby is investigating why Daubenton’s bat colonies use so many roosts each season and why they change roost so often. Is it to select a more favourable microclimate, to be near better foraging sites, or to escape the ectoparasites that can plague them during the nursery season? This is a simple question to ask, but one far from easy to answer. Emma is using microchip technology as part of her strategy to tackle this question. Individually tagged Daubenton’s bats pass a detector to log themselves in and out of roosts, providing detailed information about their behaviour with minimal disturbance. It is early days yet, but this promises to be a fascinating project.

Swarming for mating
Much of our recent work has been on how bats use caves for mating and hibernation. In particular we are studying a behaviour known as swarming, when hundreds of bats swarm in and around caves on autumn nights as part of a spectacular mating display. Back in 2003 I described Nicky Rivers’ work on swarming Natterer’s bats at a small group of caves in the North York Moors. Mating during swarming prevents inbreeding amongst bats that spend the summer in small and often isolated colonies and it is therefore a vitally important event in the bats’ year. It became apparent that these caves are nationally important bat sites, attracting thousands of bats from all over North and East Yorkshire.

I also introduced the daunting task of not only assessing the potential of the many hundreds of caves in the Yorkshire Dales as bat sites, but of trying to understand what makes some caves hotspots for bat activity whilst others are ignored, to Anita Glover. Four years on, Anita has monitored swarming activity at over 60 caves and has captured bats at over 30. She has shown that although bats use a wide variety of caves, they have a marked preference for the larger systems, with big chambers and some fossil passages, which the streams that created the caves have long since abandoned. These caves probably offer better hibernation opportunities to the bats as well as being better suited to the spectacular chases that are part of their autumn mating behaviour. Anita also extended the genetics work on swarming Natterer’s bats begun by Nicky. Because bats are faithful to individual caves, and the more important caves attract thousands of bats from thousands of square kilometres of the surrounding countryside, swarming has a profound influence on population structure, and protection of key sites is of major importance to bat conservation.

Our swarming studies in Yorkshire are part of a growing project. To see how the Dales fit into the national picture, Anita compared the genotypes of Natterer’s bats from all over England. New PhD student Camille Jan is probing deeper into the ecology of swarming by looking at the genetics of bats from swarming sites right across Europe. Other members of the team will be working in France, Germany Ireland and Spain … bat research may involve very unsocial working hours, but it has many rewards.
John Altringham
Professor of Biomechanics at Leeds University